Two years ago I acquired a set of two 10″ acetates through a befriended collector who had bought them many years ago at a flea market in Brussels, and who claimed that they contained Belgian jazz music. It’s needless to say that these, probably unique, records sparked my interest and I’m thrilled that they eventually found their way into my collection, as they do comprise some brilliant, groovy, beautiful – and very likely Belgian – jazz music.

However, the more fond I grew of this music, the more frustrated my inner jazz archaeologist became. Because besides a few handwritten song titles on one of the discs, these records provide not the least bit of information on where, when or by whom this music was made. There is no mention of authors, musicians, recording dates or location, catalogue or matrix numbers, simply nothing. Since I’m intrigued by this music, I hope to be able to identify the artist, and therefore I’m putting the music and all the information that I do have, out here in the hope that somebody can provide more information.

Before you continue reading, hop over to Soundcloud and listen to the recording of these acetates. 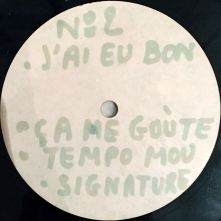 The labels show handwritten track titles. The most important clue is to be found in the title of track A1 (Indicatif “Pitchoun”), which indicates that the music was used for, or at least intended to be used as, the soundtrack for a film, cartoon, tv programme, or radio show. Track B4 (Signature) is a ten second reprise of this theme, which seems to confirm that this was indeed ‘functional’ music. The rest of the material is all original. None of the titles are listed in Robert Pernet’s Belgian Jazz Discography and the Sabam database gives no results either.

What do we learn from this?

Possible time of recording: Based on the music, the sound of the recording and the way that it was manufactured, I would date this in the late 1950s or the early 1960s.

Possible artist: The music is performed by a jazz quintet consisting of a piano-bass-drums rhythm section, a clarinet player and a flute player. There does not seem to be a clear ‘leader’ of the band, at least not when judging by solo time or solo order. This line-up is rather unusual and from the top of my head I don’t know of any fixed modern Belgian jazz combo that had a flute-clarinet frontline in that era.

Possible place of recording: The fact that the track titles are in French narrows down our search, but doesn’t mean Belgium per se. The word ‘Pitchoun’ is a big clue here: a native French speaking friend told me that it’s definitely Walloon dialect, but that it can’t be narrowed down to a specific region. However, the French dictionary Larousse mentions it as well, so I’m not 100% sure. Maybe any of you native French speakers can provide more insight? 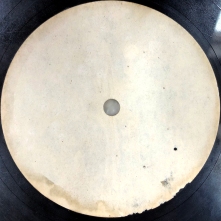 Disc 2 provides even fewer clues than disc 1, and besides ‘1x’ written in pencil, there’s no information at all on the records. The clues provided by the music itself don’t help us much further either. On C1 we find the same quintet as on disc 1, but expanded with a trombone player who takes the last solo. On C2 the flute is left out and replaced with a tenor saxophone, which could mean two things: a) the flute player doubles on tenor or b) the flute player is replaced by a different saxophone player for this number, which could indicate that our clarinet player is the band’s leader, as he is the only horn present in all numbers. D1 continues with the same line-up, with trombone and tenor saxophone taking solos before the clarinet, which could be a reason to neglect my previous theory. Or not. The tune here sounds familiar – is it not the Richard Rodgers-penned ‘It’s Crazy’ (listen to the intro on the Sarah Vaughan version)? D2 consists once again of the same line-up.

First question: do these two discs really belong together, were they conceived as a pair? The fact that disc 1 ends with the ‘Signature’ tune, seems to suggest that they were not, as the inclusion of such a tune is a clear ending. The change in line-up on most part of disc 2 seems to confirm this. The fact that disc 1 has written information and disc 2 not, does this too. On the other hand, the band sounds very similar, and the fact that these discs were found together and are very identical in terms of manufacturing, strongly suggest that they come from the same source.

Now, these were my theories. What do you think? If you have any more information that could point me in the right direction, let me know in the comments below or drop me an email through the contact form.